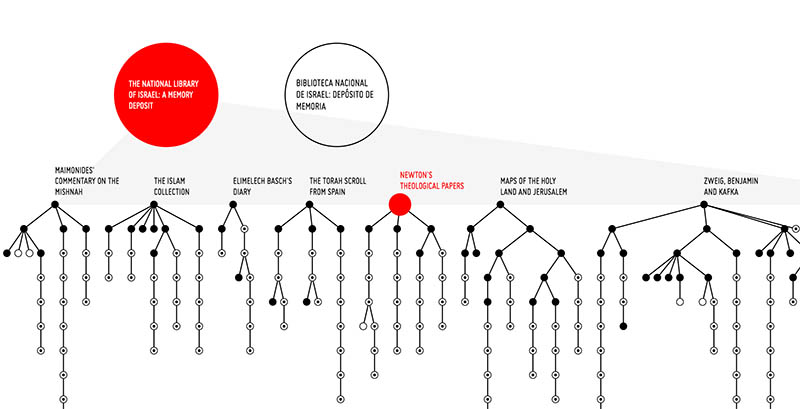 It’s not every day that the launch of one of our web products is accompanied by a high-profile international event and written up in El Pais (the highest-circulation daily newspaper in Spain). But we agree, that the project is noteworthy both in terms of the beautiful presentation that it delivered to museum goers for the “Depósito de Memoria” live and online exhibit for the Casa del Lector in Madrid, but also in the technology that drives it, which makes a pretty complex task fairly simple.

Museum educators had charted a complex path that they wanted museum goers to experience that involved interaction with documents and images of primary sources. To achieve this path, they would need to present viewers with artifacts from the collection at the Casa del Lector, the National Library of Israel, as well as a variety of institutions throughout Europe.

Casa del Lector sought a tablet-optimized app that would supplement the somewhat minimal exhibit in the museum itself with the archival material from elsewhere. With a “touch-enhanced” experience, exhibit viewers could interact with the objects in front of them, as well as a rich collection of outside artifacts and contextualization that made the objects come alive.

Additionally, a web application could do what a physical exhibit could not - draw explicit links between streams of thought, with immediate delivery of the content that drives that connection. All of this takes place in the viewer’s hands in a self-directed fashion.

From a technological perspective, the obstacle to implementation was chiefly in how to assemble all of the media in an efficient manner and present it to viewers in a way that reflected the museum educators’ vision. In addition, the application needed to use best-practice “touch” features and have a fluid and fast interface for viewers so that the online experience could be as visually smooth as the in-person experience.

For the front-end, Gizra proposed to use the Data-Driven Document (D3) project, a JS framework that focuses on document transformations and transitions and helped achieve much of the look and feel that the museum had envisioned. Because it only modifies the attributes that actually change, D3 is able to reduce overhead and allow graphical complexity with a more fluid visualization.

To serve the application, our priority was to deliver a fast and smooth operating experience. To do so, we wanted to be able to serve static pages (to decrease the overhead), but accommodate dynamically changing content. To realize that, we used the Jekyll static site generator combined with GitHub’s web serving feature. There’s no server-side as such: the data is entered via a 3rd party desktop app and exported into XML, based on which our code creates Jekyll files to be served from Github Pages.

Faced with a unique set of expectations, Gizra used available resources - assembled in a unique way - to deliver a powerful end-user experience for visitors to the Casa Del Lector. Ido Ivri, Head of Business Development and Innovation and the National Library of Israel commented on Gizra’s work on the project:

“Gizra translated our wishes to technical specifications and to a working product and did so in a timely manner and within budget... and captured the needs arising from the different partners.”

Although the live exhibit closed, the project lives on through the web application in both English and Spanish versions.